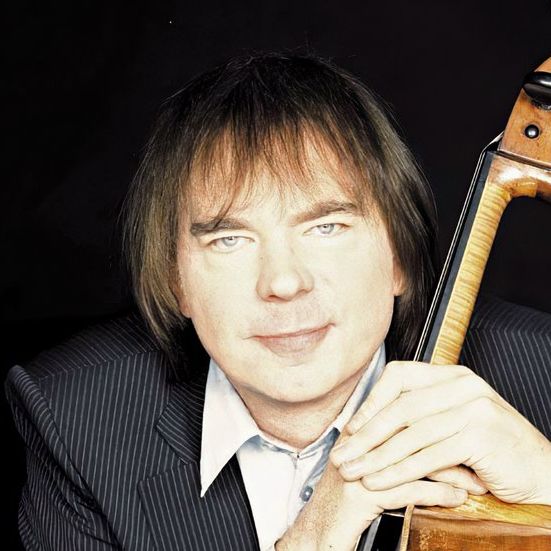 Julian Lloyd Webber enjoys one of the most creative careers in music today. As a solo cellist he has performed with many of the world’s greatest orchestras and conductors including the Berlin Philharmonic Orchestra, Czech Philharmonic Orchestra, London Symphony Orchestra and every leading symphony and chamber orchestra in the UK in partnership with such conductors as Sir Georg Solti, Lorin Maazel, Lord Yehudi Menuhin, Sir Neville Marriner, Yevgeny Svetlanov, Esa-Pekka Salonen, Sir Mark Elder and Sir Andrew Davis. He has also collaborated with a wide range of legendary musicians from pianists Sir Clifford Curzon and Murray Perahia to jazz artists Stephane Grappelli and Dame Cleo Laine and rock musician Sir Elton John.

Julian’s many recordings include his BRIT Award-winning Elgar Cello Concerto conducted by Yehudi Menuhin – chosen as the ‘finest ever version’ by BBC Music Magazine, the Dvorak Cello Concerto with Vaclav Neumann and the Czech Philharmonic, Tchaikovsky’s Rococo Variations with the London Symphony Orchestra under Maxim Shostakovich, a coupling of Britten’s Cello Symphony and Walton’s Cello Concerto with Sir Neville Marriner and the Academy of St Martin in the Fields which was described as ‘beyond any rival’ in Gramophone magazine and ‘Variations’, famous as the theme to ITV’s long running ‘South Bank Show’. Julian has also inspired more than fifty new works for cello from composers as varied as Malcolm Arnold, Joaquín Rodrigo, Andrew Lloyd Webber, James MacMillan, Philip Glass and Eric Whitacre.

In 2007, at the invitation of the Secretary of State for Education, Julian founded the UK Government’s In Harmony programme and he continues to Chair Sistema England. The two programmes combined have introduced the power of music to more than sixty thousand school children from the least privileged parts of England. Julian was made a Fellow of the Royal College of Music in 1994 and is the recipient of a Crystal Award from the World Economic Forum (1998) the Classic FM Red Award (2005) and the Incorporated Society of Musician’s Distinguished Musician of the Year Award (2014). Julian has represented the music education sector on BBC1’s Question Time and The Andrew Marr Show, BBC2’s Newsnight and BBC Radio 4’s Today, The World at One, PM, Front Row, and The World Tonight.

In 2014 Julian was forced to retire from playing the cello due to a neck injury which reduced the power of his bowing arm. In July 2015 he was appointed principal of Birmingham Conservatoire. During his five-year tenure he oversaw the move to a new £57 million building and the merging of the existing Conservatoire with the Birmingham School of Acting. In September 2017 the Conservatoire was awarded the Royal status by Her Majesty the Queen.

Julian is married to fellow cellist Jiaxin Cheng. A lifelong Leyton Orient supporter, he was the London Underground’s first official busker and the only classical musician to perform at the Closing Ceremony of Olympics 2012.